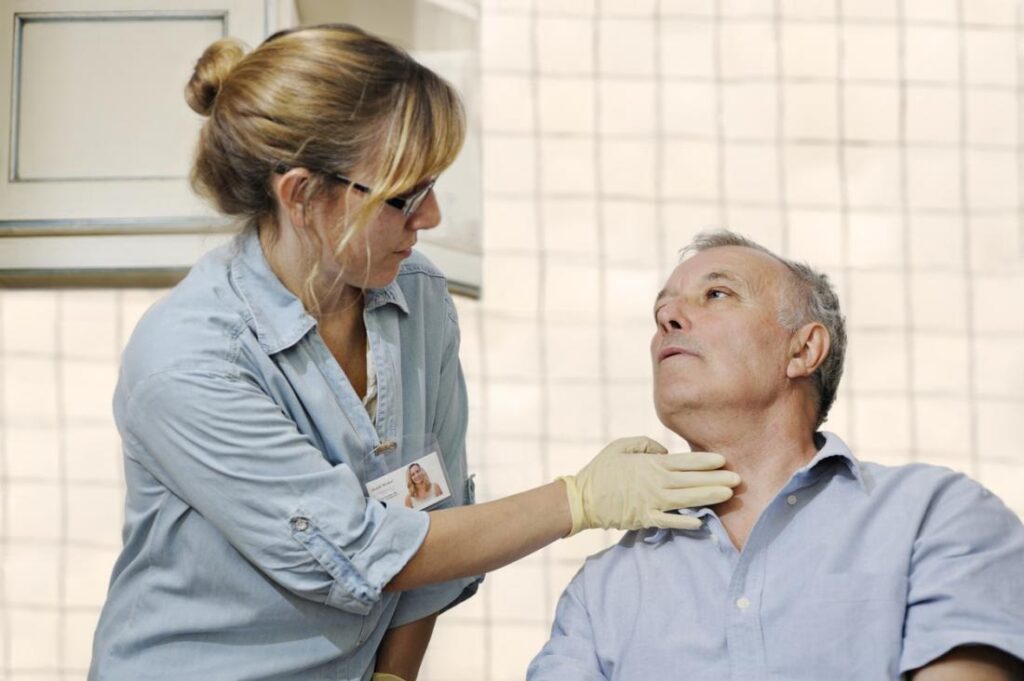 Dysphagia is the inability or difficulty transporting food, solid, liquid or both, from the mouth to the stomach. This symptom can be an acute process, which develops at a specific moment in our lives, or progressive, which manifests itself little by little, making it more difficult to detect and diagnose.

The path of food: from the mouth to the stomach

Although chewing and swallowing are easy for us, it is a complicated actions involving about 30 muscles controlled by our brain. Once we put the food in our mouth, we voluntarily decide to chew it, moisten it with our saliva and push it towards the back of our mouth, where the pharynx begins, to swallow it. Subsequently, the involuntary part of swallowing begins. At this moment, the brain sends a signal to the muscles of our throat so that they do the necessary actions that allow the food (or food bolus) to pass from our pharynx to our oesophagus and from there to the stomach.

Types of dysphagia and causes

Dysphagia is not a disease but rather a symptom of other conditions. Its prevalence in the general population is between 6-9%, but in the elderly, especially in the standardised, it increases to around 60%. In general terms, we could classify dysphagia as follows:

According to the origin:

Motor dysphagia: due to alteration of the muscles or the areas of the brain that control and coordinate swallowing. It can be caused by Alzheimer’s, Parkinson’s, amyotrophic lateral sclerosis (ALS), cerebral vascular accident (CVA), etc.

Mechanical or obstructive dysphagia: occurs when there is difficulty in passing food due to causes such as tumours in the face or neck or narrowing of the lumen of the oesophagus, among others.

Depending on the affected area

Oropharyngeal dysphagia is the difficulty transferring food from the oropharynx to the oesophagus. People who suffer from it usually have excessive salivation, slowness to start swallowing, cough, return of food to the nose, changes in speech, and it is more common that they have problems ingesting liquids.

Oesophagal dysphagia occurs when difficulty swallowing is in the oesophagus and usually presents a sensation of obstruction in the area above the stomach entrance or chest pain. It is usually more common for problems with ingesting solids to occur.

Depending on the type of dysphagia we suffer from and its cause, we may have difficulty swallowing solids, liquids, or both. In most cases, treatment must be personalised and treated from a multidisciplinary setting, including different health professionals such as nutritionists, speech therapists and doctors.

There are specific symptoms or clinical signs that can make us think that a person may have dysphagia and to which we must be attentive, especially with the oldest members of the family:

It may be thought that dysphagia can only be annoying when eating food, but it goes beyond simple discomfort and can have serious consequences such as:

To improve the symptoms of dysphagia and avoid associated complications, we can take a series of measures during and after meals.

Nutritional measures must achieve the correct water, energy and nutrient intake. For them, we have to look for the volume, texture and the right temperature of the food and consider that the person must also enjoy the food, so we must also take care of their appearance and texture.

Everything You Need To Know About Eye Bag Surgery!

Is There A Cure For Mitochondrial Disease?

Recipes for the Ketogenic meal plan for 14 Days

Protecting Your Mental Health While Getting A Degree